Share a memory
Obituary & Services
Tribute Wall
Read more about the life story of Richard and share your memory.

On Saturday January 14, 2023, after a long battle with cancer, Richard “Dick” Helminiak passed away resting peacefully in his home surrounded by his doting family who loved him dearly. He was a devoted husband, loving father, grandpa, great grandpa, and unwavering friend to all who knew him. Dick was born in Toledo on January 23, 1938, to John and Bonnie Helminiak (Luckey). He was preceded in death by his parents and four siblings, Marian, John, Ray, and Bonnie Jean.

Dick left home at the age of 14 to make it on his own and never went back. He truly had a drive to make something of himself even though he had little help. The word “can’t” was not part of his vocabulary, and he quickly accomplished anything he set his mind to. He tried to enlist in the military underage and was caught. He was admitted on his second enlistment attempt. Dick was a proud member of the United States Army from January 3, 1955, through February 1, 1958.

He married his soulmate, Dorye Kujawa on August 2, 1958, at the Epiphany Lutheran Church in Toledo and together they welcomed their first child in 1959. Dick was the rock of his family, and he will be greatly missed. His family frequently gathers to celebrate holidays, birthdays, and other special occasions.

He was an extremely hardworking man, with many successes and accomplishments demonstrated throughout his life. He began working in the tree business then became a Lucas County Deputy Sheriff while also running a gas station. One of his greatest achievements was owning his own business Dick Helminiak and Sons Excavating, Inc. Through entrepreneurial grit and determination, Dick demonstrated an exemplary work ethic that he instilled in his four sons.

Dick led an active life outside of work. He enjoyed going to horse shows with his family, polka dancing with his wife and reaching for the sky by flying his plane and helicopter. He loved visiting his home in Ft. Myers, Florida where he hosted family and friends often. He was a member of the Northern Lights Lodge #40, Veteran of Foreign Wars, Joseph Diehn Post #468, Fraternal Order of Eagles Rossford Aerie 2322, Sylvania Moose Lodge #1579, Elks Lodge #54, and Toledo Area Polka Society.

Dick always made everyone feel important and special. Anyone who was having a bad day could count on him to lift their spirits. He would invite them in for a beer and cheer them up. Even if he, himself, was struggling, no one would know. He worked every day the last few years despite battling cancer. In addition to his beloved family, he will be deeply missed by his wide circle of friends and social acquaintances. He will forever be fondly remembered as the strongest man known to all of his loved ones.

Visitation will be at Reeb Funeral Home, 5712 Main St, Sylvania, OH 43560, Wednesday January 18, 2023, 2-8:00 P.M. where services will be held, Thursday, January 19, 2023, at 11:00 A.M. Entombment will be at Ottawa Hills Memorial Park. In lieu of flowers, the family requests remembrances to ProMedica Hospice or the Providence Lutheran Church.

Your browser does not support this video format. You should be able to view it in Chrome, Safari or Internet Explorer. 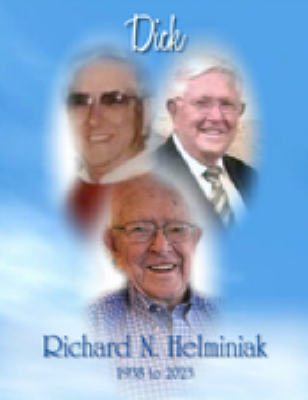